As they saying goes, “Halloween isn’t just a holiday, it’s our entire October mood.” In just one week Halloween szn will officially commence. Every year it seems people get more and more into the spirit and Halloween decorations now rival Christmas in terms of their elaborate and extravagant displays.

While not every house can be as naturally spooky as the House on a Haunted Hill from the ‘59 movie or the Addams family manor or even the Murder House from American Horror Story, here are some people who did a pretty good job nonetheless creating the perfect Halloween aesthetic. 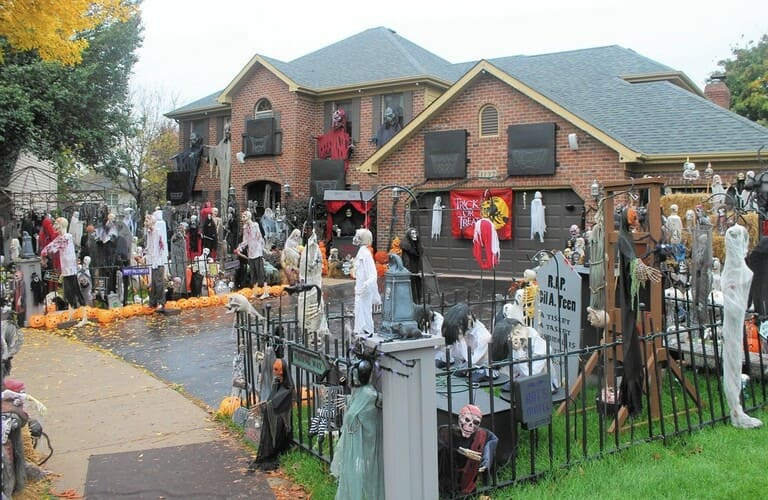 While Halloween has surged in popularity over the years, not everyone is on board the terror train. This family’s over the top October decor caused a stir among the neighbors who filed a complaint to the homeowners association. In their complaint the disgruntled neighbors cited “constant noise, garbage from visitors, as well as the nearly complete shutdown of the street.” Essentially, it was the movie Deck The Halls with Danny DeVito and Matthew Broderick but for Halloween. The display had a little bit of everything from ghosts, zombies, tombstones, skeletons, and a row of pumpkins on each side of the drive way leading to the garage. 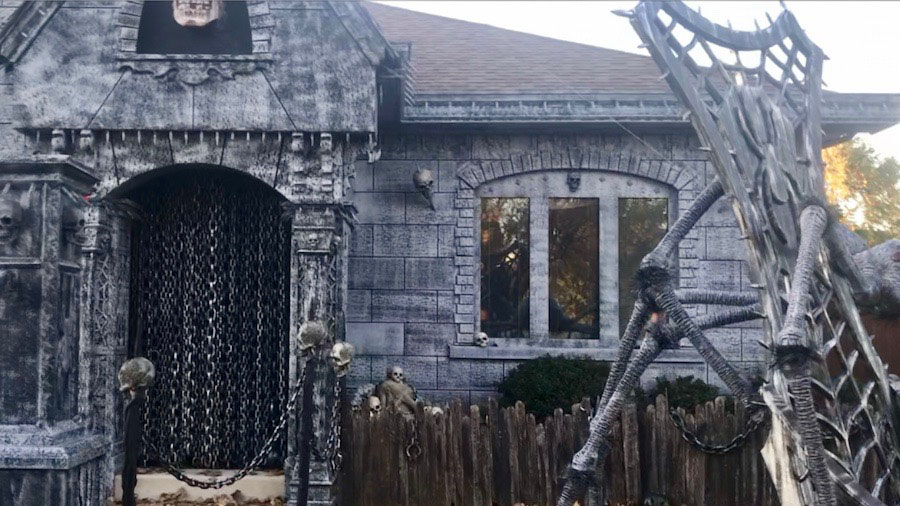 This graveyard themed display was done by Jeff Eggener, a carpenter in Illinois who creates elaborate Halloween decorations every year. This one turned a house into a crypt. Everything from the entrance to the siding of the house was built to create the image of a crypt. From skull heads perched on spikes near the front door to the large yard ornament in the front, this takes Halloween decor to the next level. 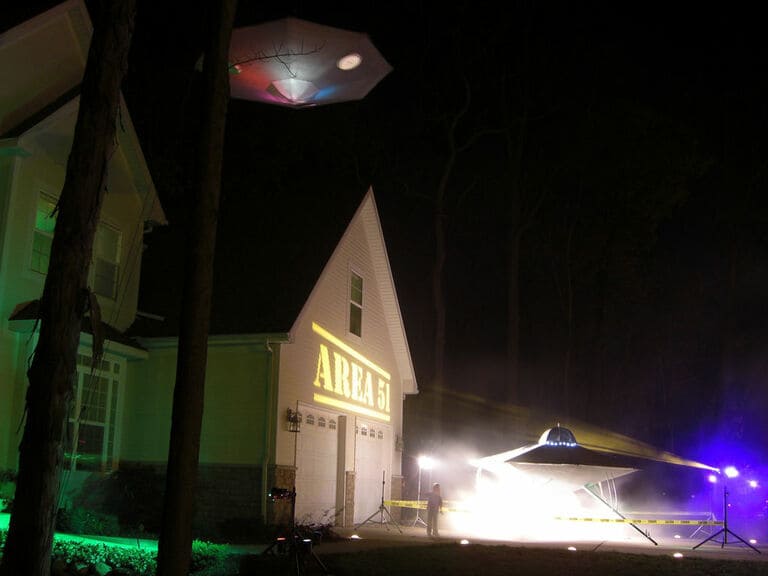 This house’s area 51 Halloween display is simply but effective. With a fully built realistic looking UFO parked in the driveway surrounded by yellow tape is ‘out of this world.’ The look is complete with some green lights on the house, a glowing ‘Area 51’ projection on the garage and another full size UFO hovering over the house, ready to abduct and probe unsuspecting trick-or-treaters. 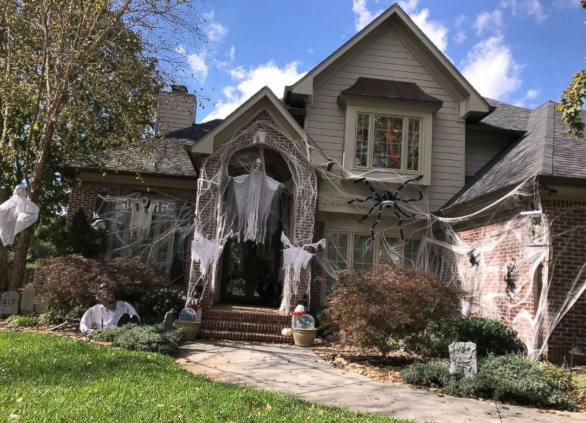 When it comes to extravagant Halloween decorations, the Willis family of Knoxville, Tennessee doesn’t hold back. Each year nearly every inch of their home both outside and inside is trimmed with terrifying home decor. From the ghosts that greet you at the front door to the giant spider crawling down the side of the house, the only thing left bare-boned at this house are the skeletons that inhabit the inside. 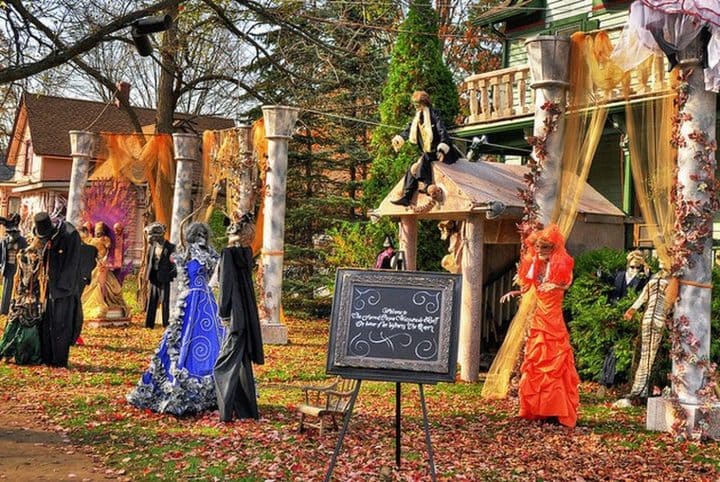 The tagline to the 1980 movie Prom Night was, “if you’re not back by midnight, you won’t be coming home.” With that idea in mind, this house went with a ‘skeleton prom’ motif for their October decor. Perhaps the skeletal remains in this front yard display are souls condemned to spend all of eternity at their high school prom–what could be more terrifying that spending forever stuck in high school? Either way, we’re sure this dance is to die for. 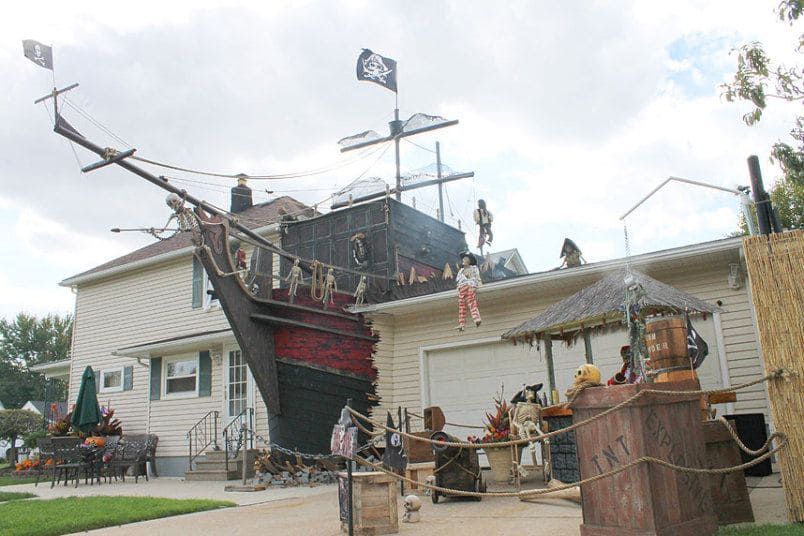 Halloween themes don’t always need to involve dead bodies, ghosts, and witches. Some of  the best home decorations pick a random theme and roll with it. This house went above and beyond with this pirate theme. The detail that went into this display is enough to win any neighborhood decoration contest. The ship really looks like it crashed right through the middle of the house. That, along with the pirate bar in driveway makes this home display one of a kind. 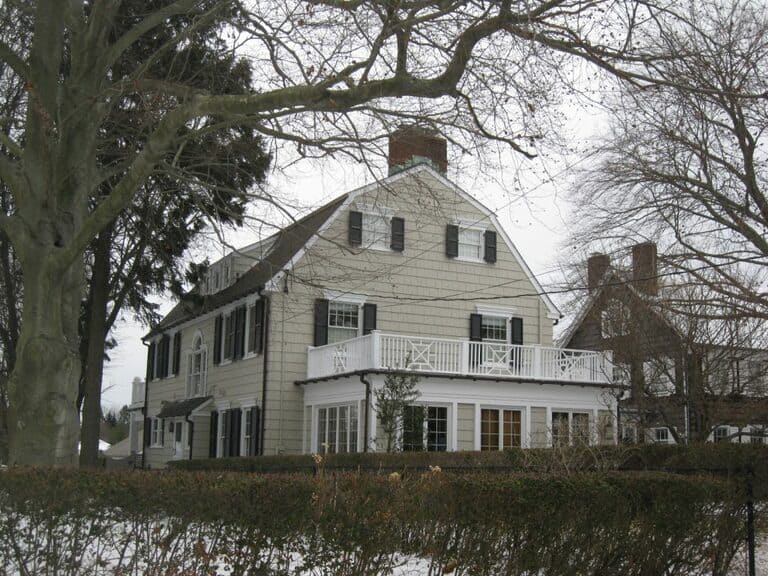 This last house needs no decoration. If you know, then you know. 112 Ocean Avenue, better known as ‘The Amityville horror house’ is easily the most notorious home in America. It’s the site where DeFeo family murders took place, and later, where the Lutz family would last just 28 days before fleeing, claiming that paranormal activity was terrorizing them, inspiring the Amityville Horror book and movie. It is for this reason that 112 Ocean ave speaks for itself without a single fake cobweb or jack-o-lantern. 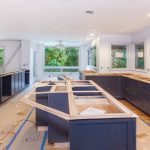 Top 5 Ways to Save Money When Remodeling your KitchenHome Improvement, Top 5 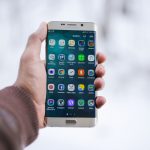