Vegas, San Diego, and Phoenix are cities regarded as the hub of classical style when it comes to rich architectural styles. These cities are also known to have the best variety of luxury homes, communities, 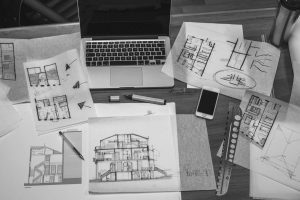 and designs. Most home styles found in these cities come with a twist of vintage, renaissance, and medieval artwork, they also depict an incredible history with a telling past in every sculpt and design. These are the popular home styles to be aware of.

Las Vegas is notable for its luxurious homes and designs, the most common residential architectural styles available in Las Vegas include;

The Ranch Style – This style is a very common in Las Vegas. The ranch style house is commonly noted for its long, one dimensional, close to the ground profile with a wide open layout. This house style is basically an infusion of modernist ideas and styles with notions of the American western period of wide open spaces to create an environment/atmosphere of informal and casual living.
This style often comes in a single story, basic and open floor plans with a family room separate from the bedroom area, pop- corn ceilings, low-pitched gable roofs, and an attached garage. These elements are regarded as the key features that depict a ranch house style although not all homes built with this style contain all of them.

Ranch style homes are definitely making a comeback in architectural designs since its era of popularity in the 1950’s not only because it creates a quality living family experience for its owners but also because of its simple, attainable, and affordable style, which is definitely what every average American homeowner wants.

TUDOR STYLE – Tudor- style homes are found in modern-day suburbs all across America, and they are very typical in Las Vegas. Tudor home styles are most notable for their unique look and are mostly identifiable with their steep-pitched, intersecting gabbled roofs, stucco or hard stone walls, a central fireplace comprising of large stones, beautiful timber framing, and an arched entryway.

SPANISH COLONIAL STYLES – Spanish homes are fundamentally based on Moorish and Mediterranean architectural styles. Homes built with the Spanish styles mostly have artistic designs and are primarily focused towards providing a serene and comfortable atmosphere for its homeowners.
Spanish homes are notable for their tiled roofs, tower-like chimneys stucco walls, towers, arcades, balconies, and ornamental iron details.

Spanish homes are built with eclectic styles, and Mediterranean touches are combined to create an exotic but harmonious appearance.

TUSCAN STYLE; Tuscan style homes have a classic Italian design and a whiff of European charm. This style is similar to the Mediterranean home style, and they are notable for their stucco exterior and stone accents giving the home a rustic yet elegant look.

SOUTHWESTERN HOME STYLE; Southwestern home style isn’t one of the most popular styles among homeowners in Las Vegas, but it’s definitely your “run to” choice if you want to keep out heat and dryness. The southwestern style depicts a mix of Spanish colonial architecture and Pueblo architectural style.
Typical characteristics of this home style include; flat, terra cotta flat roofs or clay tile roofs, stucco finishing. Southwestern homes also include heavy doors and ceiling beams which not only creates elegance but also adds a bold look to these homes.

MEDITERRANEAN STYLE: the Mediterranean home style was influenced by the Italian and Spanish architecture. This style is showcased by its low-pitched tile or terra cotta roofs and stucco walls. Other notable features include its arch motifs, balconies and mosaic touches which make it distinct from the other common styles.
Apart from the notable home styles in Las Vegas, San Diego is also a rich city when it comes to good architectural taste. Common home styles that have shaped the style and architecture of the city of San Diego include; 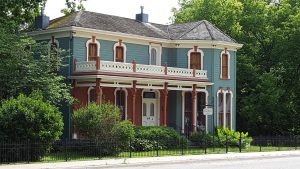 THE VICTORIAN HOME STYLE: Homes built with this style are often very vintage and are designed simply. They are often characterized by mansard roofs, cast iron castings, classical pediments, irregular roof lines, gable-roofed dormers, and porches. The ornate design features which are common with this home styles add a sense of elegance and dignity to the home.

CRAFTSMAN HOME STYLE: This style is commonly referred to as the “arts and crafts style home.” The structure commonly depicts thick panels of wood work around the doors coupled with a window and an extensive front porch and artistically shaped pillars.

THE MID-CENTURY HOME STYLES; this style features flat roofs, angular details, expensive walls of glass, clean lines, and wide open floor plans. These features depict the elegance and style of this home plan.
Phoenix is not left out in this architectural tour. Some common home styles attributed to this city include;

CONTEMPORARY HOME STYLE; this style comprises of clean, stark lines and a neutral color pallet with minimalist forms which allows this home style to take center stage in the world of architectural elegance.

Other notable features of this home style include; steel, wood, concrete, and glass.

THE SPANISH MISSION STYLE: this home style was inspired by churches built by colonial missionaries and is widely appreciated in phoenix. This style is distinguished by its plain, stucco or stone exterior and its red tile roof. It also makes use of commonly sourced materials which include, clay, wood, and stucco stones. This style combines these features to create a Spanish influenced aesthetic with its simple lines and designs.

SANTA FE STYLE: A favorite among homeowners in Phoenix and its suburbs, the Santa Fe home style is very similar to the southwestern style, and they feature flat roofs and dessert-inspired tones, houses built in this style are typically warm, earthy, and sometimes classically southwestern.

TERRITORIAL HOME STYLE: this style is associated with the culture of New Mexico. It gracefully blends the Greek revival and Gothic details with Pueblo and Spanish mission architecture. Homes built in this style are typically a one-story house built around a courtyard, notable for their flat roofs with parapets and exterior walls of adobe coated with stucco.

There are also distinct for their colorful shutters, brick tile work, repeating columns and the occasionally pitched roof.

Each style described in this post has a unique design and advantage. Whatever style you prefer, you should be confident that you are making a good decision when buying a home with any of these designs or remodeling your house to a modern style. 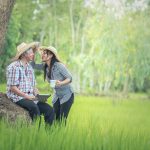 What To Know About Affordable Housing in CaliforniaBlog